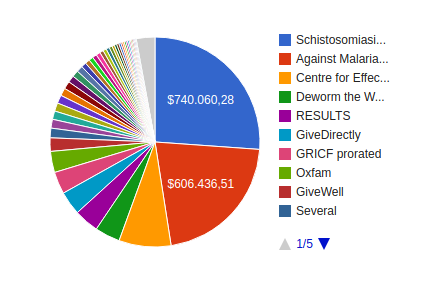 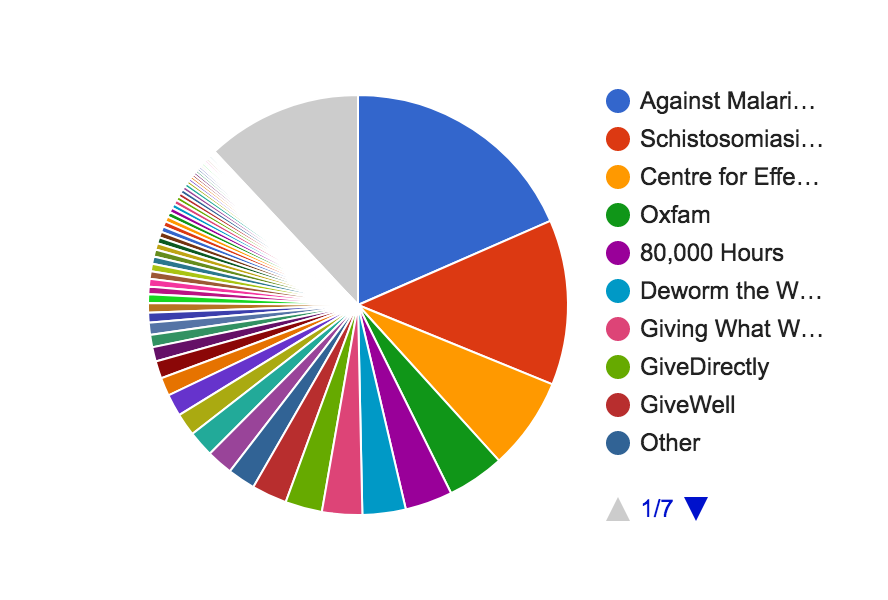 I think this change between September 2014 and today is a good thing. We seem to be investing more strongly into preparatory work as opposed to only placing the final bricks in almost complete impact edifices. Since these are, I think, totals over all time, the current allocation (say, this year) must be even further slanted toward organizations like CEA, 80,000 Hours, and hopefully Wild Animal Suffering Research than is apparent from the total.

The reason I’m happy to see it is that it shows that we may be solving one or more of the challenges of: personal risk aversion, coordination, and understanding who generates the bulk of the impact. I’ll cover the first two only briefly, because it seems to me that they’re known, and mostly focus on the last.

When a friend of mine founded a charity, she did year-long research, got pro-bono counseling from specialist friends of hers, got seven people together to be legally able to found the organization, and got one of them to provide the office space for the meeting. Then a lawyer, who charged a particularly friendly rate, made the final strokes to the by-laws, so we could all sign them. (I was one of those seven people.)

This might be an analogy for the work of the Against Malaria Foundation. Since AMF steps in and subsequently people don’t die, it might seem like AMF is to be credited with saving those people’s lives. Especially when it’s actually the case that they would’ve died without AMF and didn’t die with AMF, it would seem that way. But while AMF certainly made the difference between them dying or not dying, everyone else, without whom these people would’ve died too, also needs to be credited: distribution partners, net producers, donors, organizations like GiveWell who funnel donations to AMF, researchers who found bednets to be a good idea, everyone who prevented the third world war, everyone’s parents, et al.

In the above analogy, the distribution partners or the net producers may be like the lawyer; AMF, perhaps, is like the cofounder who provided the room and one of the signatures; my friend is like GiveWell and the Disease Control Priorities (DCP2) study together; and the friends she interviewed may’ve been like the 20-odd teams that conducted RCTs on malaria prevention with bednets.

The particular impact of the founding of her charity or conducing a net distribution is thus a joint achievement of all the above people and many more. So there are cases, perhaps most of them, where a lot of effort had to first be invested before one charity could plug some final hole or place some final brick and make all the impact come to fruition. The bulk of the iceberg probably lies below the GiveWell-recommended tip. 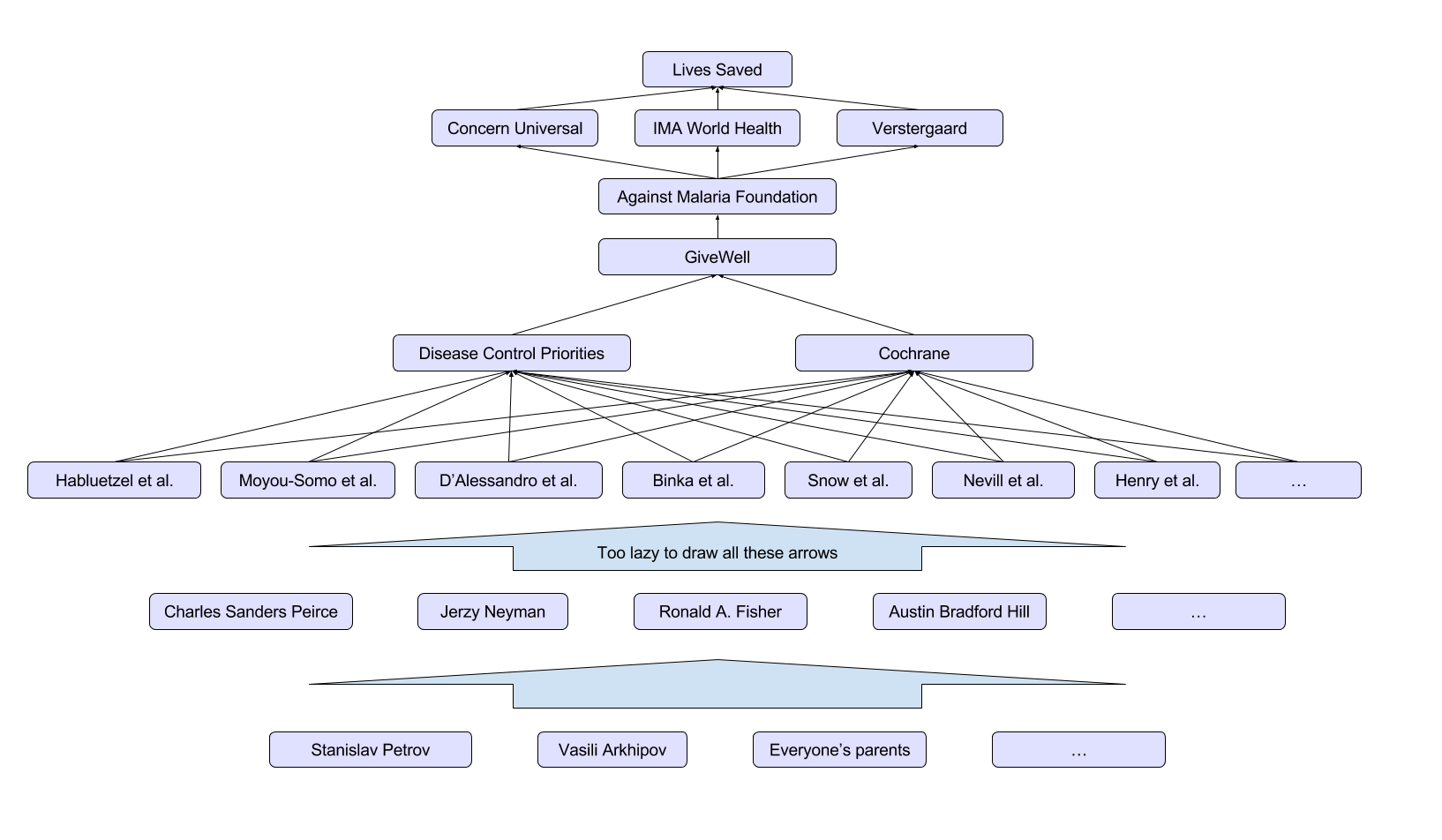 Much of the bulk of the iceberg is research, which has the interesting property that often negative results – if they are the result of a high-quality, sufficiently powered study – can be useful. If the 100 EAs from the introduction (under 1.a.) are researchers, they know that one of the plausible ideas got to be right, and 99 of them have already been shown not to be useful, then the final EA researcher can already eliminate 99% of the work with very little effort by relying on what the others have already done. The bulk of that impact iceberg was thanks to the other researchers. Insofar as research is a component of the iceberg, it’s a particularly strong investment.

There’s another reason for why the bulk of the iceberg is likely big. Let’s conceive of impact as a reduction of the integral over time of something we care to eliminate – say, suffering. An intervention like bednets will slightly reduce the slope of the curve (perhaps for a limited time) thereby reducing the aggregate suffering over all time. The earlier this reduction happens, the better. 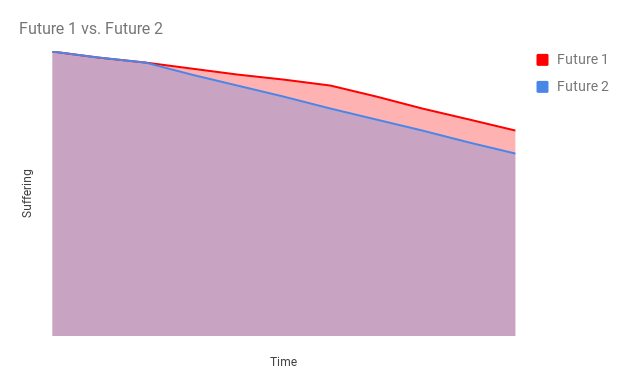 Each step closer to the impact is dependent upon one or more previous steps, just like GiveWell’s contributions were dependent on studies, electronic money transfer, the invention of LLINs, Sci-Hub, etc. A delay of one of them – say, LLINs haven’t been invented – means that all dependent steps closer to the impact and all steps that, in turn, depend on them, are delayed as well. And among all the dependencies on one “level,” the one that has the longest delay is the one that determines the delay. The same happens at all further levels in the dependency tree, and all these delays add up.

In practice, I would not expect clean levels like that to emerge, but insofar as there are inventions or discoveries that are highly necessary for some impact to emerge, one strategy that would follow from this perspective would be to try to speed up the development of the necessary condition that one expects will take longest to come about.

A counterargument might be that in some environments, something quick and simple can serve as a proof of concept to attract investment or revenue that can then enable the development of the more difficult innovation.

There’s really no one true way of assigning partitions of this positive impact to the different contributors, but economists have come up with some sane-sounding axioms (informally summarized below) to describe one conception of justice and a method that uniquely assigns partitions accordingly. That is the Shapley value. (Another method of allocation with different goals and results is the core.)

Note that this is wholly unnecessary for prioritization. We can choose our actions so to maximize the total impact without applying any algorithm that splits it up again and assigns it to individual contributors. I have, in the past, argued against even attempting such an allocation because all algorithms I had been aware of had unacceptable implications. I probably still do, because the Shapley value is probably hard to calculate in most situations effective altruists will find themselves in. (Not so, however, in advertisement.)

When we’re talking about replaceability in EA, we’re usually taking some action and some likely alternative involving inaction and comparing them, e.g., comparing the world with a world without AMF but otherwise identical. (80,000 Hours has touched on it here.) When we’re talking about comparative advantage, however, we’re considering a number of counterfactuals and a number of different actions and reactions to find the maximally impactful variant. I don’t know for sure, but it seems to be like making full use of one’s comparative advantage should be equivalent to maximizing one’s Shapley value.

A consideration of replaceability (defined in this limited way) alone, however, does not have the same properties. Say, we want to determine the contribution of C in a cooperation of A, B, and C – denoted as the set {A, B, C}. Replaceability would only consider the case where {A, B} cooperate and the case where {A, B, C} all cooperate and compare them. That may not be sufficient. Rather, to determine the Shapley value of C, we need to consider all eight subsets of {A, B, C} and calculate the mean of C’s contributions in all cases that involve C.

Another difficulty with actually calculating a Shapley value is that in practice cooperation usually happens between groups of very large cardinality (just think of all the contributors in the graph above) where each contributor contributes some at least infinitesimal part. There is a reformulation of the Shapley value that captures this, but I don’t know how helpful it’ll be even just for illustration purposes.

The main take-away for me is to make sure that I sufficiently value also nonobvious preparatory work that has made some impact possible and to value preparatory work that is currently being done that may make the difference between impact materializing earlier, only much later, or never at all.