The ultimate usage authorities for a certain dialect are its speakers, and corpora are the searchable aggregates of these people’s voices. Unlike dictionaries, however, corpora leave most of the interpreting to you. In that I will follow their example.

The query I used, -[be] [warn].[v*] ,|.|of|against|that, is optimized to exclude as many transitive constructions as possible, not to capture all intransitive ones. -[be] excludes passive constructions, [warn].[v*] matches all verb forms of to warn (.[v*] specifies the tags), and matches any of those five tokens.

[warn].[v*] also matches the potentially -ambiguous warning, relying completely on the corpus’s tagging to make the distinction. In order to confirm the plausibility of the results, I compared them to the results of -[be] warned|warns|warn ,|.|of|against|that.

I will not distinguish between intransitive and absolute (also called elliptical) usages of to warn, as I see in this case no reliable way to make the distinction (save, perhaps, asking the speaker) and certainly none I could translate into a corpus query. Furthermore, absolute usages are extremely rare in any case. Absolute verbs are verbs whose objects are implied but not stated. Discussing to remind, Merriam-Webster’s Dictionary of English Usage(1995, p. 812) gives an example from the The Times Literary Supplement of February 11, 1983: “Your correspondence … reminds of a question.”

The Corpus of Contemporary American English, COCA, “is the largest freely-available corpus of English, and the only large and balanced corpus of American English. It was created by Mark Davies of Brigham Young University in 2008.” It “contains more than 410 million words of text and is equally divided among spoken, fiction, popular magazines, newspapers, and academic texts. It includes 20 million words each year from 1990–2010 and the corpus is also updated once or twice a year ….”

On January 23, 2011, my query turned up 7,369 tokens, about 35% of the 20,918 tokens matching [warn].[v*]. I manually checked 100 tokens out of a cross section of all years and genres, none of which was transitive. There are, however, infrequent constructions such as “When field reviews began in the 1990s, states were repeatedly warned that they were failing to comply with the law warnings that continue to this day” (source) and “Lincoln warned that able organizer but dilatory strategist, General George B. McClellan, ‘Your enemies will probably use time as advantageously as you can’” (source) that do slip through.

On the same day, my comparison query yielded 7,066 tokens, about 37% of the 18,917 tokens for . The difference of two percentage points (about 6%) is barely statistically significant, and probably negligible for the purposes of this investigation. Again, my hand-checked sample of 100 tokens included no false-positives.

The British National Corpus, BNC, contains about 100 million words of texts written between the 1970s and 1993.

Note that the genre balance of the is not as even as that of the COCA, hence the frequencies per million words rather than the raw frequencies should be used for comparisons of genres.

The Corpus of Historical American English, COHA, “is the largest structured corpus of historical English (or any language, for that matter).” It contains “more than 400 million words of text of American English from 1810 to 2009.”

Here, the query yields 4,046 tokens, 22% of the 18,747 tokens matching [warn].[v*], which is interpreted as warn|warns|warned in this corpus, rendering the comparison query redundant.

When the Google Books Ngram Viewer launched in December 2010, it immediately joined many a linguist’s league of favorite toys. As the name suggests, it is not a feature-rich corpus, but an interface to a database of n-grams, series of \(n\) (currently one to five) words, gleaned from some of the 15 million books scanned by Google. And it is gargantuan: “The datasets we’re making available today to further humanities research are based on a subset of that corpus, weighing in at 500 billion words from 5.2 million books in Chinese, English, French, German, Russian, and Spanish.”

Since the past tense forms of to warn are significantly more frequent than the present tense ones, I opted to use separate graphs with differing scales. Note also that there is no way to exclude passive constructions in this search.

Past tense of *to warn* in American Google Books n-gram database.

Past tense of *to warn* in British Google Books n-gram database.

These are excerpts from books by people I hold in high esteem. (I have only read some of the books, though.)

Jefferson specifically warned against “banking institutions and monied incorporations” (what we would now call “corporations”) and said that if they grow, the aristocrats will have won and the American Revolution will have been lost. —Noam Chomsky, Secrets, Lies, and Democracy (Odonian Press, 1994)

She warned that launching an attack on Iraq would undermine counterterrorism efforts. —Amy Goodman and David Goodman, Static: Government Liars, Media Cheerleaders, and the People Who Fight Back (Hyperion Books, 2007)

She says that a possible outcome of the Act is “the criminalization of legitimate political dissent” and warns that it “grants the executive branch unprecedented, and largely unchecked, surveillance powers, including the enhanced ability to track email and Internet usage, conduct sneak-and-peak searches, obtain sensitive personal records, [and] monitor financial transactions.” (addition in original) —Howard Zinn, Terrorism and War (Seven Stories Press, 2002)

Worse, a 1999 report had already warned that aj Qaeda was looking into using planes as missiles with the intention of crashing them into government buildings. —Michael Moore, Dude, Where’s My Country? (Warner Books, 2003)

While the army corps of engineers and others warned of the urgent impending danger to New Orleans and put forward proposals for funding to reinforce and protect the city, the Bush administration, in every year since 2001, has cut or refused to fund New Orleans flood control, and ignored scientists’ warnings of increased hurricanes as a result of global warming. —Jordan Flaherty, Floodlines: Community and Resistance from Katrina to the Jena Six (Haymarket Books, 2010)

Most of all, that earlier Silk would have prayed devoutly to the Outsider, though the Outsider had warned that he would send no aid. —Gene Wolfe, Exodus from the Long Sun (Tom Doherty Associates, 1997)

Prudence warned against it as well. —Gene Wolfe, The Sword of the Lictor (Arrow Books, 1991)

Her voice told him, very sweetly, that he was welcome to leave a message after the beep, but warned that she hardly ever listened to them and that it was much better to talk to her directly, only he couldn’t because she wasn’t in, so he’d best try again. —Douglas Adams, The Long Dark Tea-Time of the Soul (Simon & Schuster, 1991)

I remembered the previous owner had said a mechanic had told him the plate was hard to get on. That was why. The shop manual had warned about this, but like the others he was probably in too much of a hurry or he didn’t care. —Robert Maynard Pirsig, Zen and the Art of Motorcycle Maintenance: An Inquiry Into Values (HarperTorch, 2006)

So, if evidence is such an intangible thing after all, why am I warning against new ways of interpreting evidence? —Douglas Hofstadter, Gödel, Escher, Bach: An Eternal Golden Braid (Basic Books, 1979)

In Old English and in Continental Germanic this verb seems to have been to some extent confused with Germanic *warnōjan, cognate and synonymous with *warnjan to refuse, forbid, etc. (see warn v.2).

Among the twenty-three senses the lists are seven marked absol. and two marked intr. (5.e. has both labels, absol. or intr.), but none of these is likely to be of interest here, for the newest citation is from 1900.

Some two decades later, the Thorndike-Century Junior Dictionary recognized the intransitive use already:

But it does not seem to have made the cut in Webster’s 1950 New Twentieth Century Dictionary:

The British Advanced Learner’s dictionary omitted it in 1961:

So did the rather obscure bilingual Dictionary of English Style: 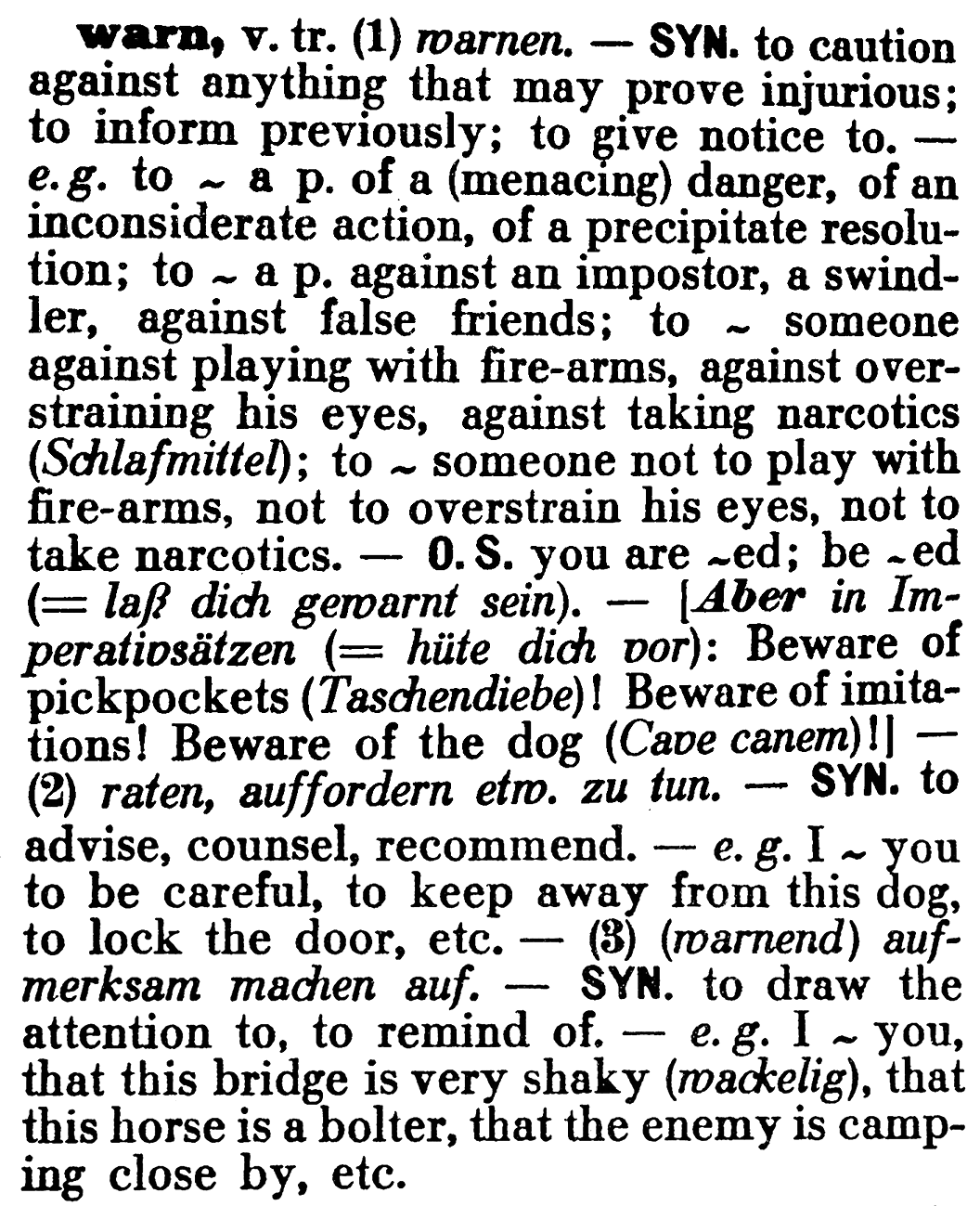 The British Fowler usage dictionary recognized it in 1965:

Even as late as 1970, the American Funk & Wagnalls Standard Dictionary (that is just its name) still omitted it: 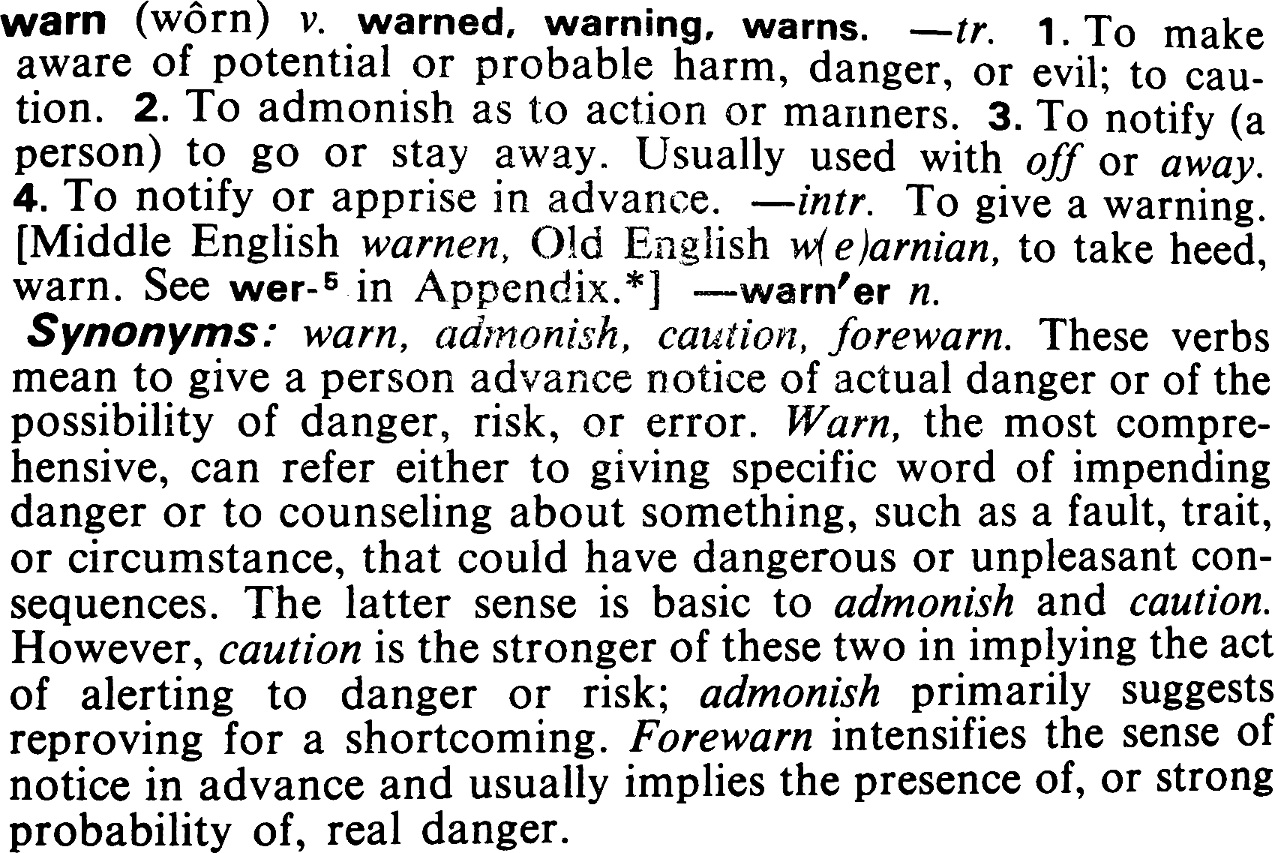 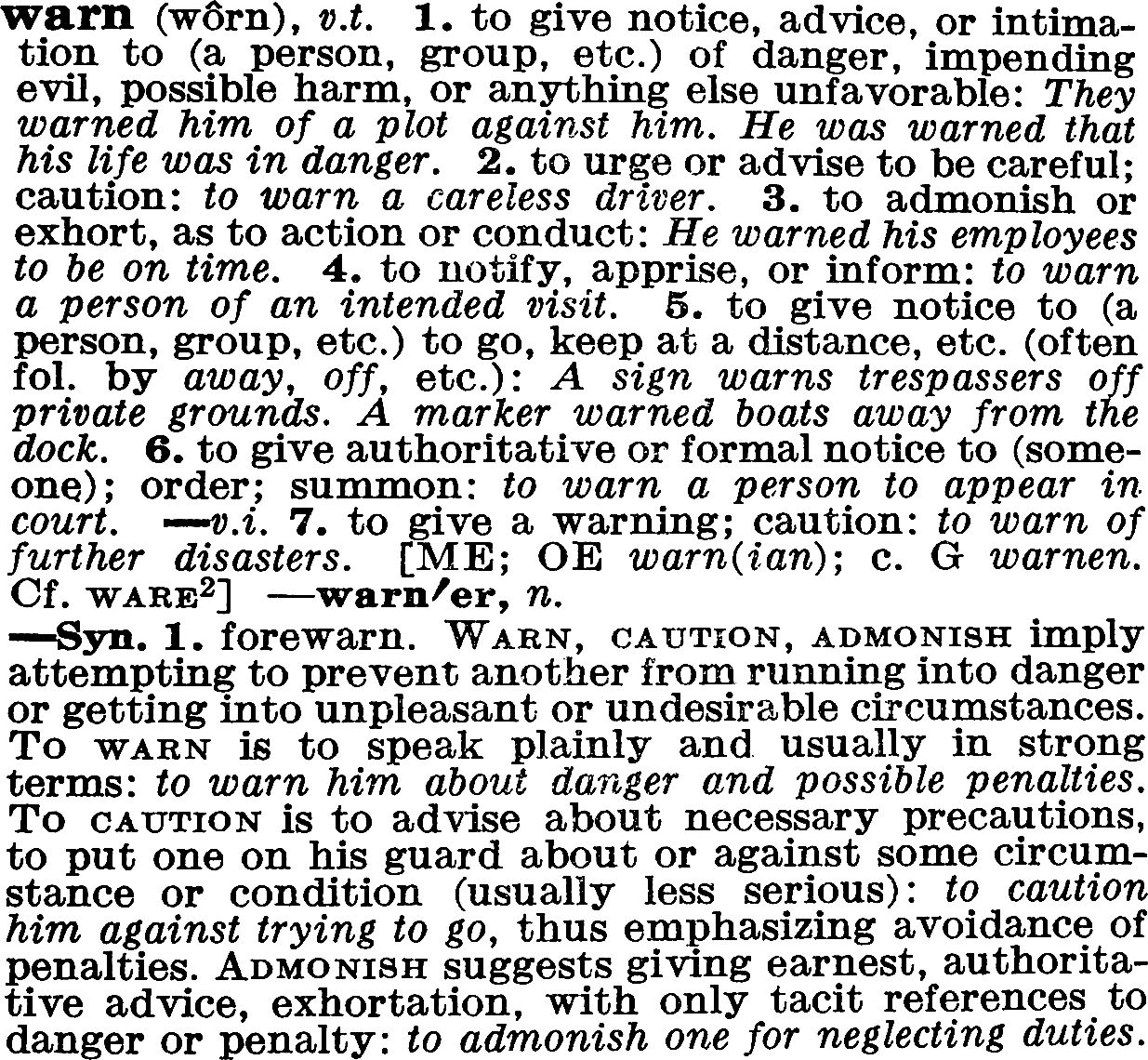 The American Heritage Dictionary with its 1979 edition, of course, continued to include it: 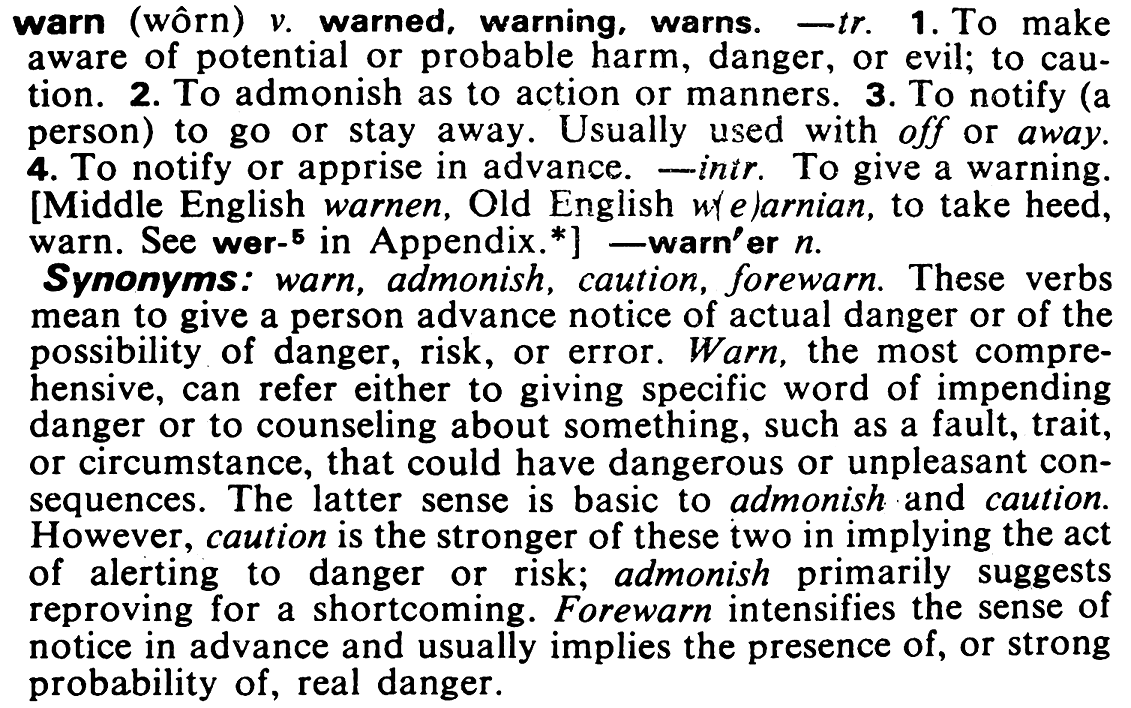 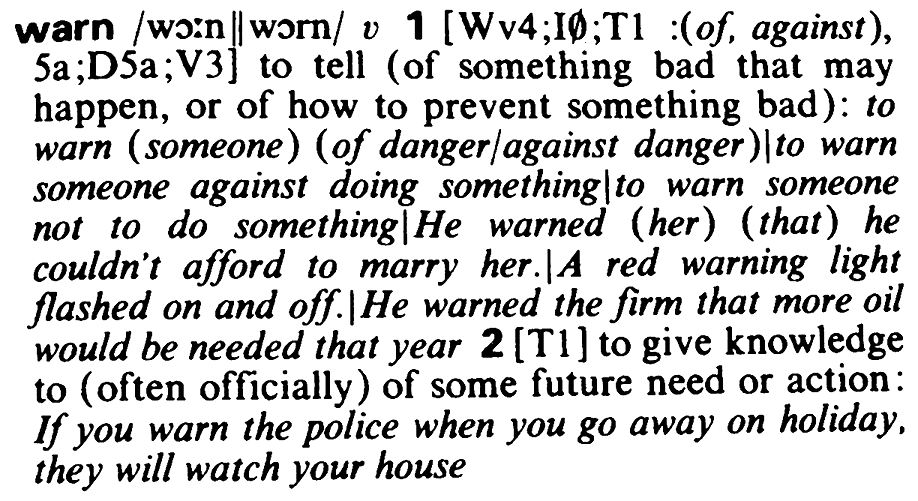 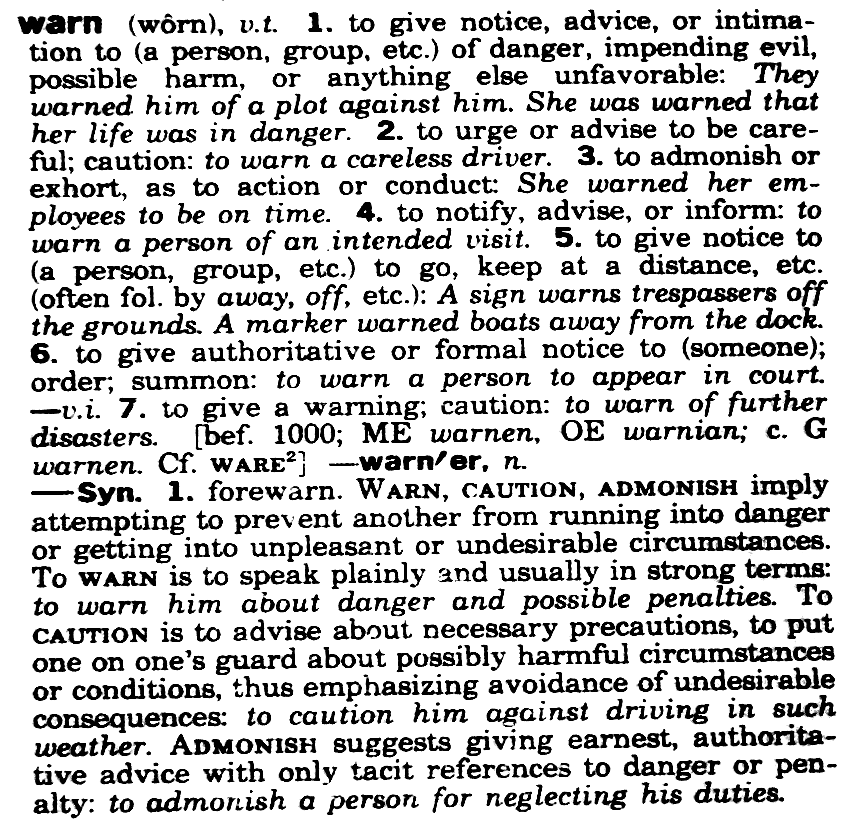 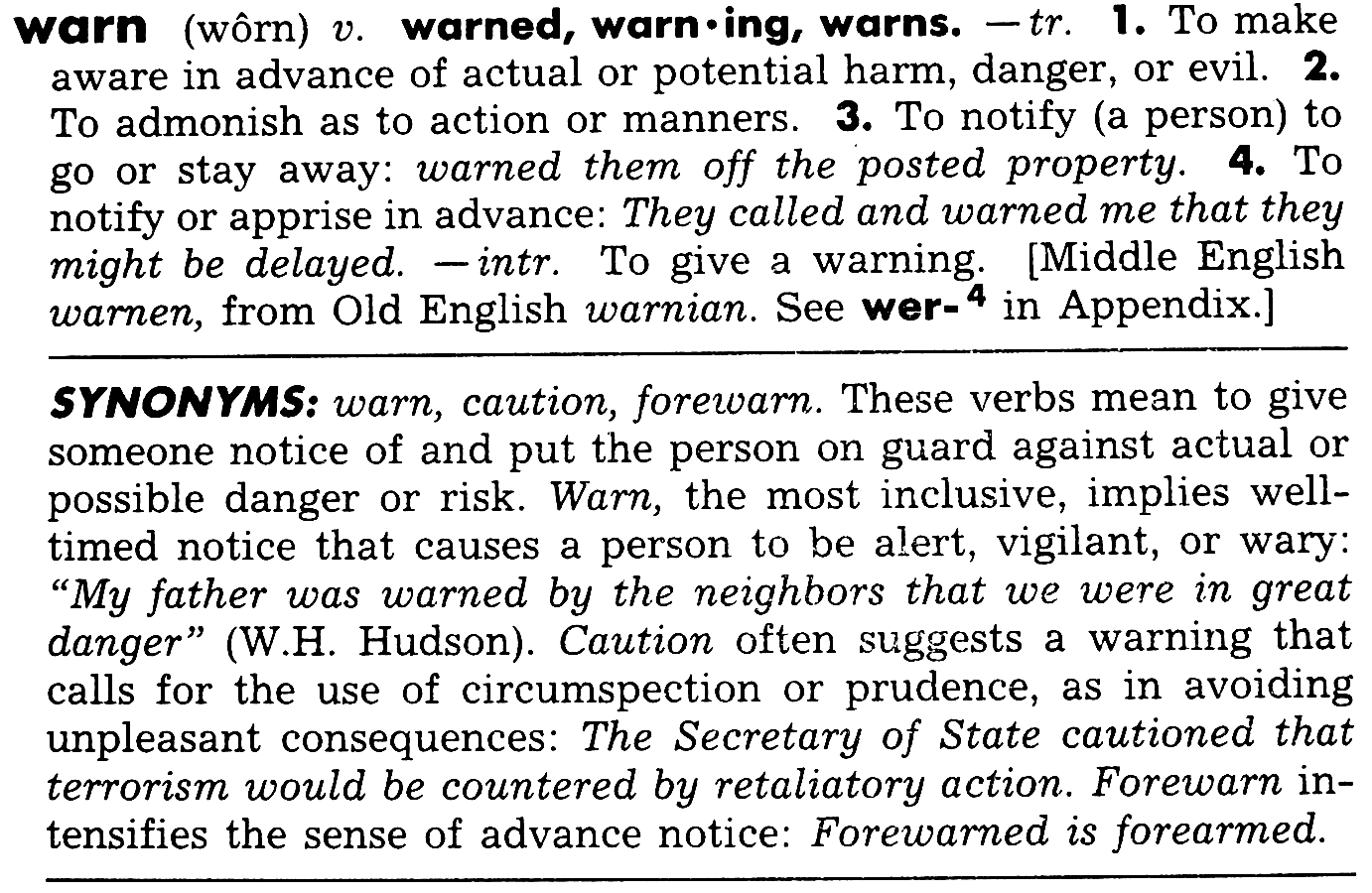 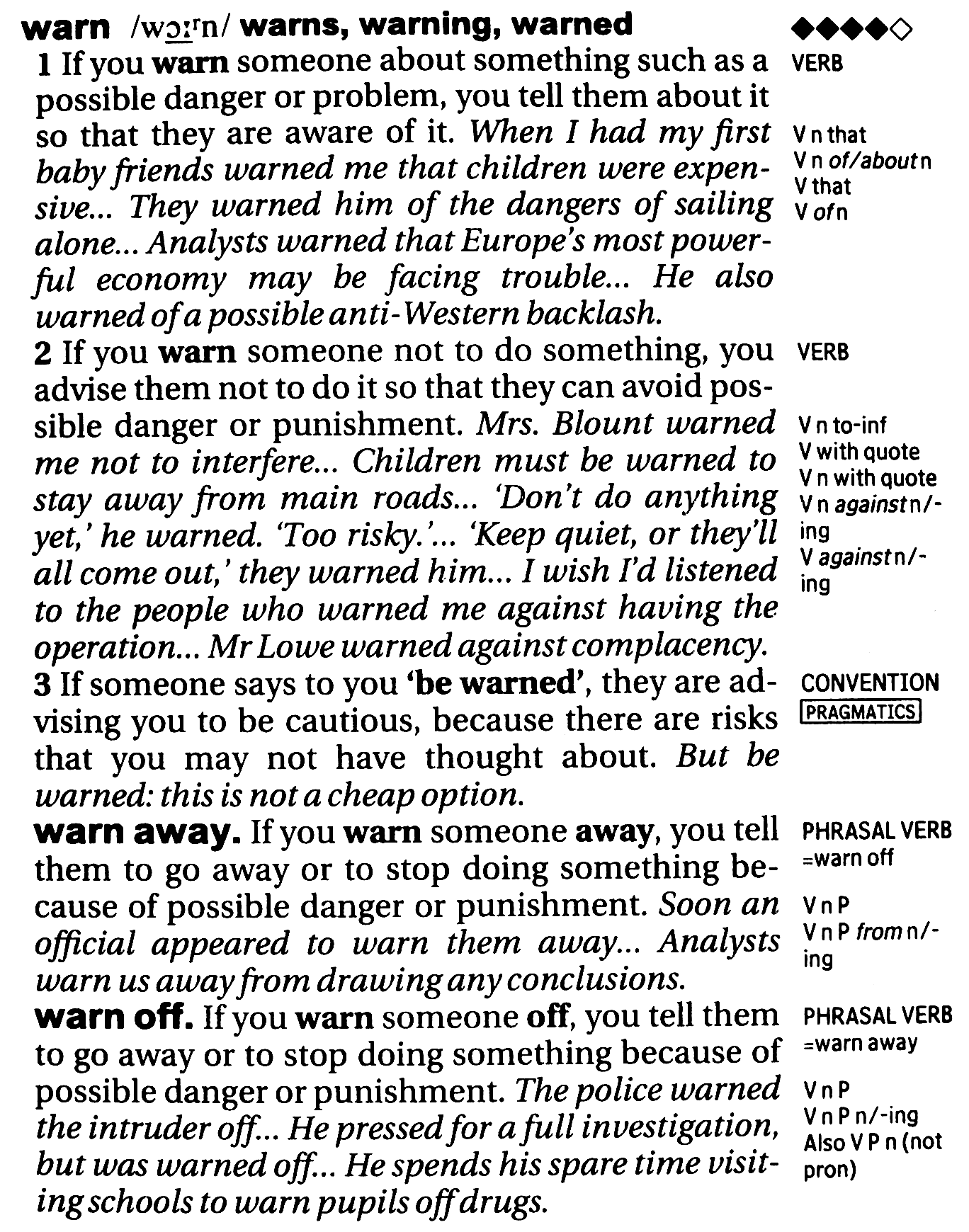 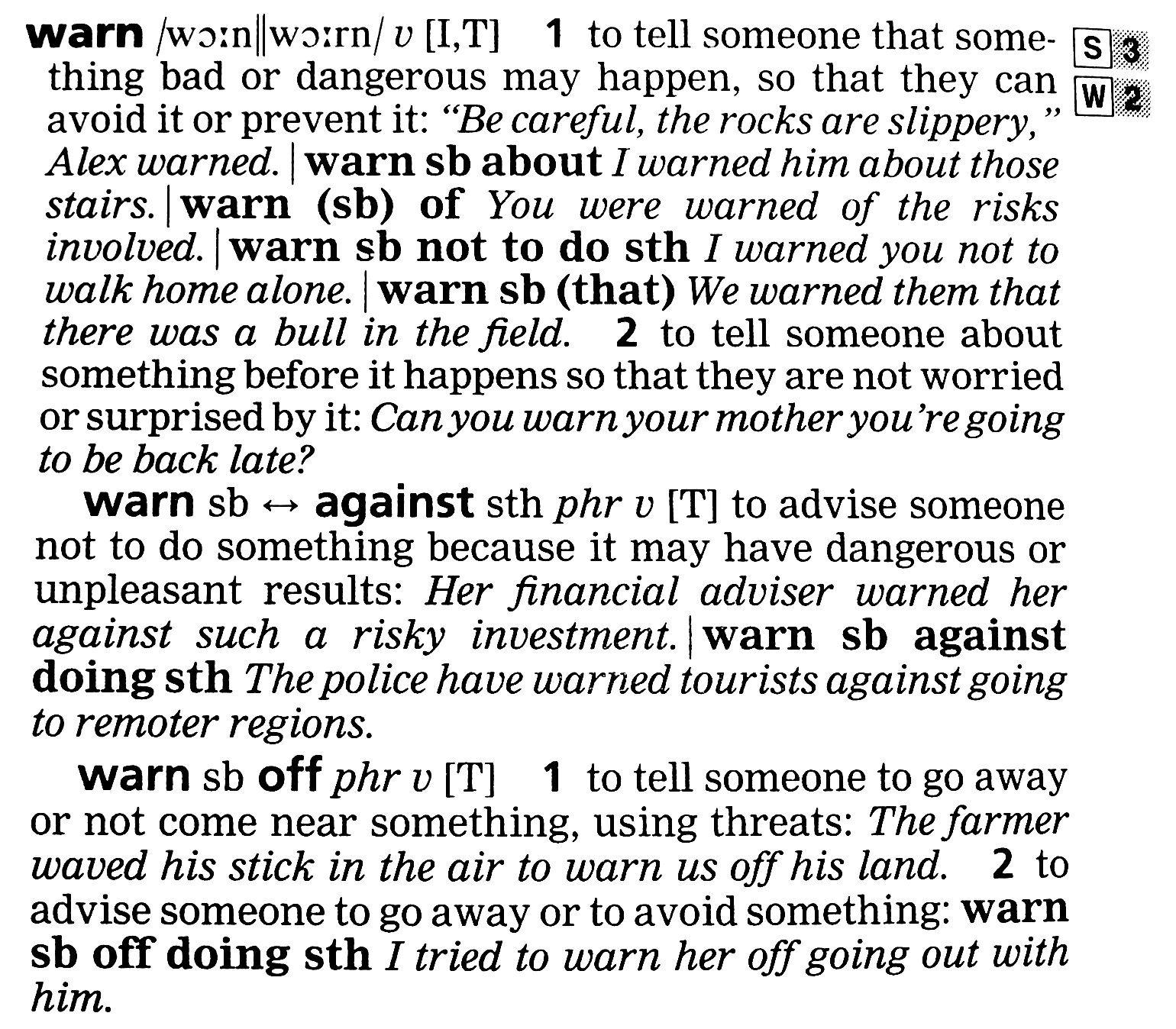 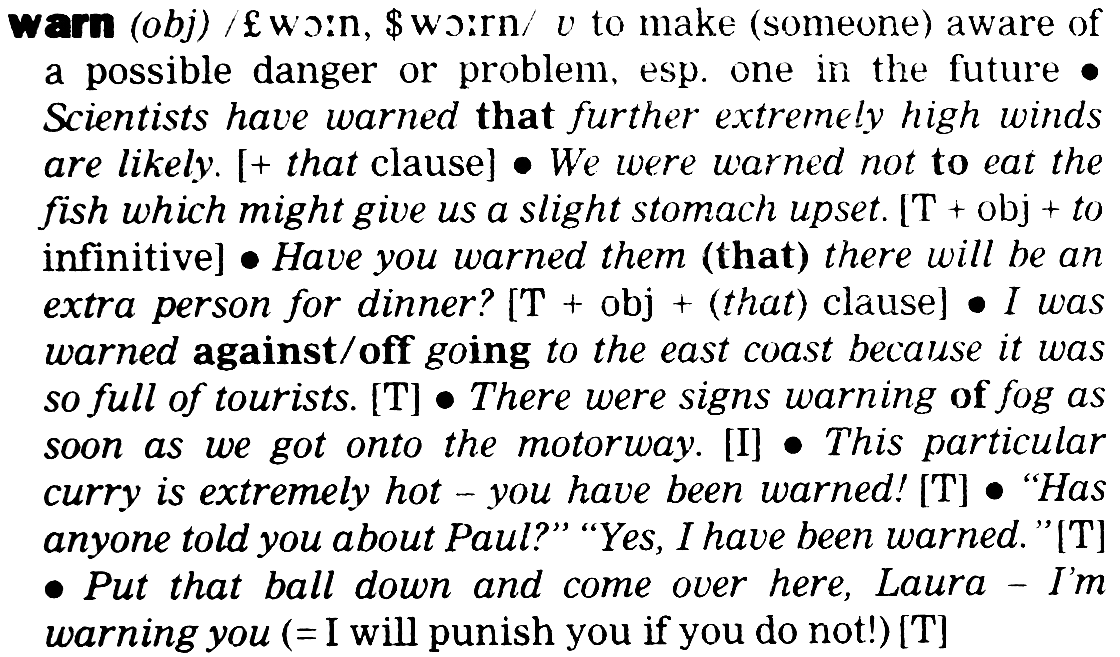 Use of warn as an intransitive verb is common and widespread, although it is actually a fairly recent development. It seems to have originated in American English in the early 20th century. American Dictionaries have recognized the intransitive warn as standard for many years, but several prominent British dictionaries continue to omit it, suggesting that it may occur less commonly in British than in American English. (On the other hand, Sir Ernest Gowers noted in his 1965 revision of Fowler that “intransitive use … is now common in journalism.”) Few commentators have warned against its use. Those who have would revise the preceding sentence so that warned has a direct object, making it something like “Few commentators have warned their readers against its use.” Such revision is unnecessary and may even be awkward or misleading in contexts where the warning is directed generally rather than to a specific individual or group.

“… which warns of the approach of spring” —Mary Austin, Starry Adventure, 1931

“But he warns against what he thinks might well turn out to be a fatal illusion” —Alain Locke, Key Reporter, Autumn 1951

“Often in the years that followed, Gottwald warned against the rising tide of Fascist parties” —Current Biography 1948 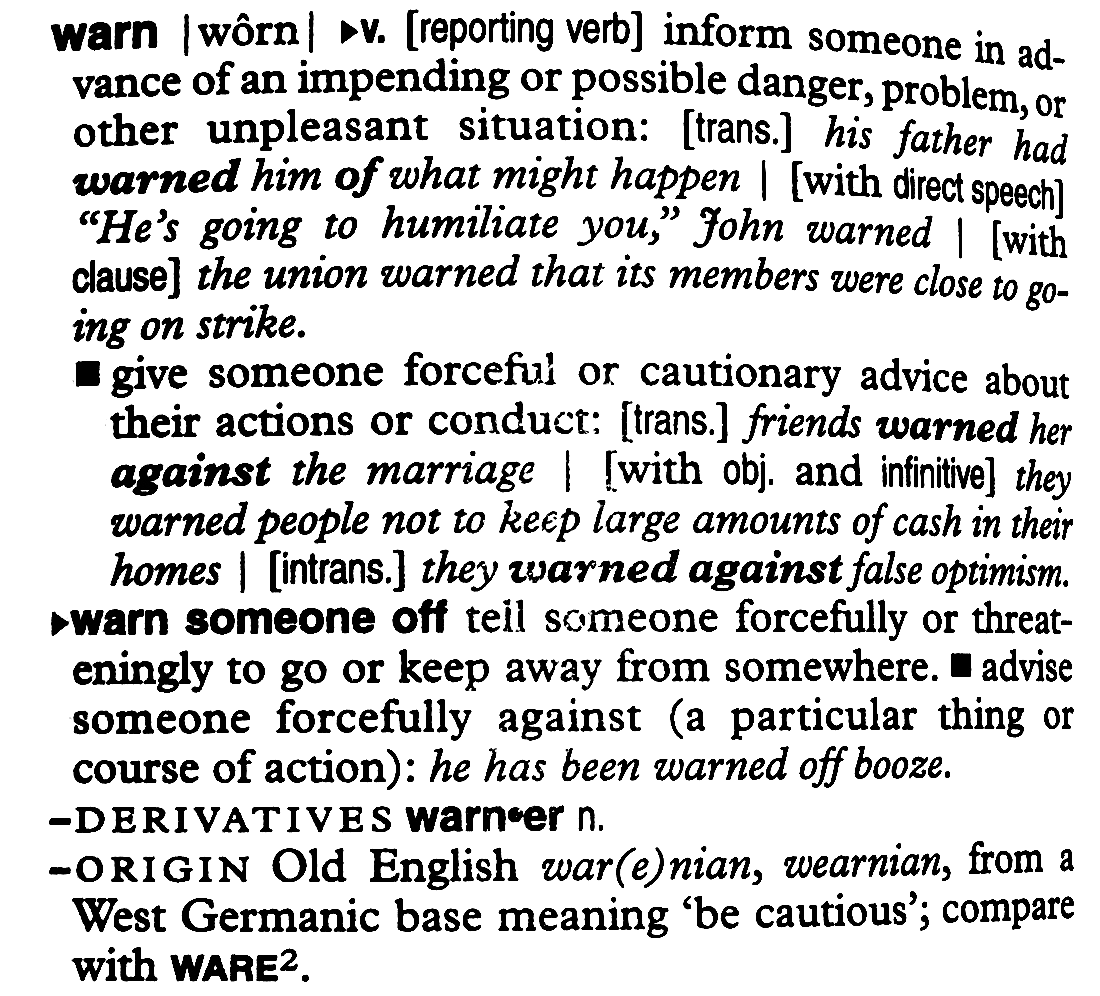 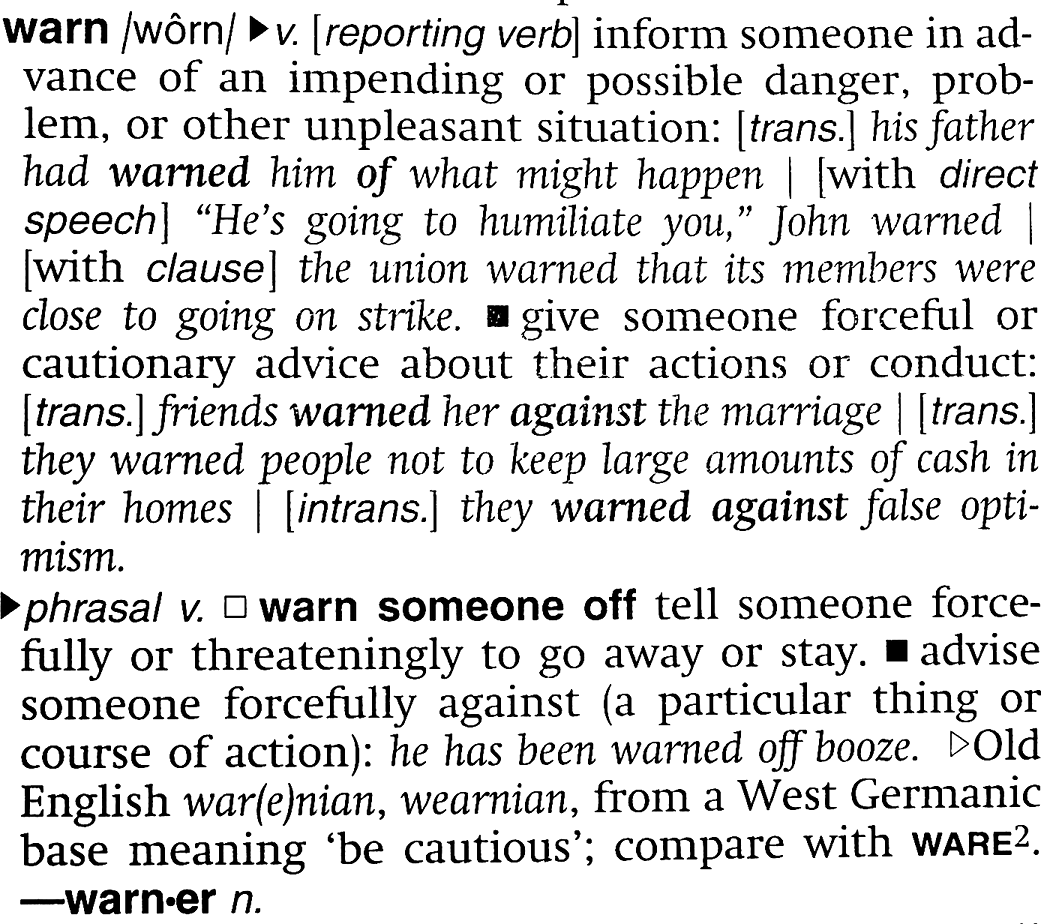 At the time that I write this, February 21, 2011, Wiktionary lists four citations for intransitive to warn, among them one from a 1526 translation of Bible verses Galatians , 9–10 by William Tyndale: “then Iames Cephas and Iohn … agreed with vs that we shuld preache amonge the Hethen and they amonge the Iewes: warnynge only that we shulde remember the poore.” The Oxford English Dictionary describes this usage as absolute.

The entry in the Merriam-Webster Online Dictionary, which cites one intransitive example (“‘This won’t be easy,’ he warned.”), looks similar to the one in the American Heritage Dictionary, but in Merriam-Webster’s Learner’s Dictionary there are a few more examples, among them the following intransitive uses: “The company has warned (investors) that its profits are likely to be lower in the coming year,” “The book warns about/of the dangers of not getting enough exercise,” and “She warns against making changes too quickly.”

Originally, I wanted to close with a funny remark on an anagram of warn, but the only one I could find is rawn, a term for “the roe or ovaries of a female fish (or shellfish)”. If you can think of a good closing remark or if you have found errors in this document, please leave a comment on my blog. Thanks for your interest, and I hope you had a seizable amount of fun reading this.