A quantitative analysis – using Guesstimate – of the harm the North Korean government inflicts on its general population and its prisoner population, and a comparison to the harm from malaria in Mozambique and Angola.

The North Korean government wants to eliminate an entire cast among its citizens. One wrong word from you or a relative and you end up in a prison, re-education, or concentration camp. After a day of grueling work you’d count yourself lucky if you got a meal or caught a rat to eat and if you got your four hours of sleep in a flea-infested or freezing cold shed before the work starts again and you have to run a mile to work to perhaps avoid the punishment of torture and rape. If you have any family, then suicide is not an option: the punishment is torture and execution of your whole family. This is what life is like for hundreds of thousands of North Korean prisoners.

It is hard to fully understand the magnitude of horror that these people incur, but I’ve tried to summarize the following article with tangible statistics that quantify the expected level of harm on the 25 million North Korean citizens who experience circumstances less abhorrent but are much greater in number. Which aspects cause the most harm, and how does it compare to other human problems? Read on to find out.

It is difficult to obtain reliable information about North Korea — namely, because of the country’s policy of isolation secrecy. Every North Korean child quickly learns that lying is vital to survival in their culture, something that some refugees, understandably, have a hard time unlearning. Hence the Commission of Inquiry on Human Rights in the Democratic People’s Republic of Korea (DPRK) of the United Nations Human Rights Council tool the testimony of eighty witnesses in an effort to use their sheer number to compile one reliable picture of the situation:

The Commission of Inquiry has found systematic, widespread and grave human rights violations occurring in the Democratic People’s Republic of Korea. It has also found a disturbing array of crimes against humanity. These crimes are committed against inmates of political and other prison camps; against starving populations; against religious believers; against persons who try to flee the country — including those forcibly repatriated by China.

These crimes arise from policies established at the highest level of the State. They have been committed, and continue to take place in the Democratic People’s Republic of Korea, because the policies, institutions and patterns of impunity that lie at their heart remain in place.

The gravity, scale, duration and nature of the unspeakable atrocities committed in the country reveal a totalitarian State that does not have any parallel in the contemporary world.

In order to quantify the total harm of North Korea against its citizens, we divide it into two parts. The first is the impact of poor quality of life on the average citizen, and second is the harm against the hundreds of thousands in concentration camps.

The population of North Korea, some 25 million, suffers from widespread malnutrition and starvation, especially outside the capital Pyongyang, which is reserved for the small upper class.1 Most people lack access to proper medical services, so treatments, including surgeries, are often administered without anesthetics if they happen at all.

The ideology of the country also forces everyone, from the earliest age, to be secretive, deceptive, and suspicious. If a North Korean child is in an obstreperous phase and, for example, insults a member of the “Kim Dynasty,” you can either hope that no one will tell on them — or on you for not reporting them — and risk that you yourself, the child, and three generations of your family get deported, or you can turn the child in. Such stress surely adds great psychological strain to the day to day life of common citizens and their families.2

In addition to the suffering of regular citizens, hundreds of thousands of deported citizens are sent to concentration and re-education camps. There, people are routinely tortured and raped, are worked to exhaustion and death with barely any food or sleep, all while being exposed to parasites and diseases. In the winter, the inhabitants of the camps are subjects to the freezing cold where they are forced to sleep under one thin shared blanket in unheated barracks. According to testimonies to the Human Rights Council, most people die within three years and almost all within five; a few manage to somehow adjust to the extreme conditions and survive longer. The musical documentary Yodok Stories captures the essence of life in such a camp. But if you’re sensitivity is anything like mine you may want to avoid watching it and rather read the summary of the UN report.

In my models I am using the framework of Disability-Adjusted Life Years (DALYs) — not because I necessarily agree with all assumptions underlying the framework or because it’s particularly fitting, but because its results are comparable with those of a large body of medical research, such as the Global Burden of Disease study. A brief explanation from Wikipedia:

Traditionally, health liabilities were expressed using one measure, the Years of Life Lost (YLL) due to dying early. A medical condition that did not result in dying younger than expected was not counted. The Years Lived with Disability (YLD) component measures the burden of living with a disability.

DALYs are calculated by taking the sum of these two components: DALY = YLL + YLD. … One DALY, therefore, is equal to one year of healthy life lost. How much a medical condition affects a person is called the disability weight (DW). …

In turn, population YLD is determined by the number of years disabled weighed by level of disability caused by a disability or disease using the formula YLD = I x DW x L. In this formula I = number of incident cases in the population, DW = disability weight of specific condition, and L = average duration of the case until remission or death (years). … Premature death is calculated by YLL = N x L, where N = number of deaths due to condition, L = standard life expectancy at age of death (expectancy − age at death).

Disability weights are numbers between 0 and 1 that have been determined for many diseases using such methods as surveying experts or surveying people affected with the disease.3 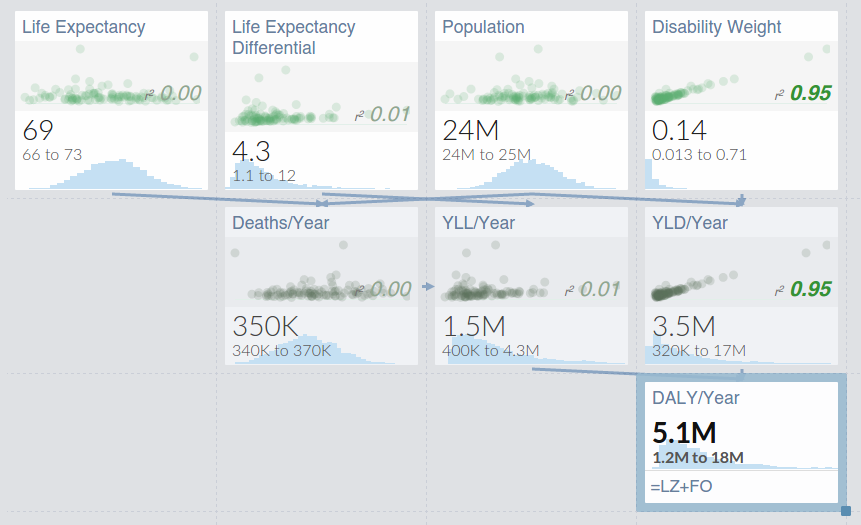 One first guesstimate that I created tries to put a rough number on the yearly suffering of the population at large using the DALY framework. The estimate takes into account the diminished life expectancy compared to the region, the population, and a disability weight.

The key weak point of my estimate is said disability weight, because it is highly correlated with the result and has the largest uncertainty of any of the inputs. The disability weights used in various large medical studies tend to be startlingly low in my perception, so they need to be seen in the context of the elicitation methods that produced them. To be consistent with this trend I also erred on the lower side. 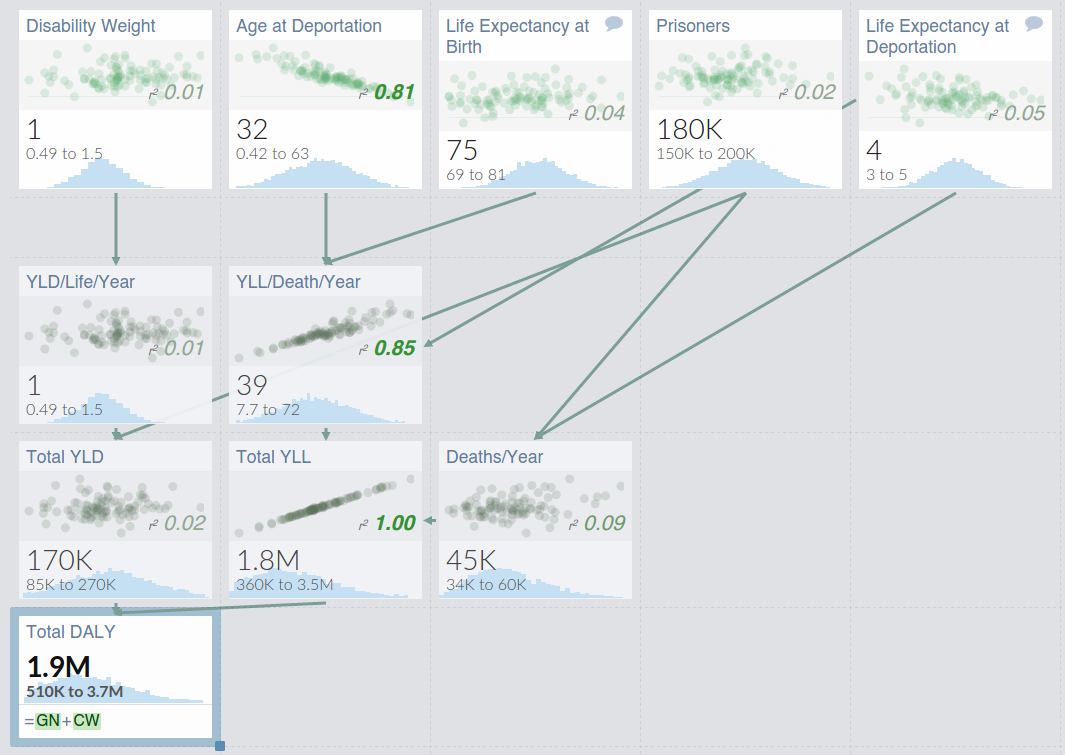 My second guesstimate estimates the yearly burden of suffering incurred by the inmates of the concentration camps. Given the extreme conditions summarized above, and given that suicide is illegal and punished by torture and execution of the inmate’s family, it is assumed that many inmates must prefer death to life in the camp. This is reflected in the disability weight, which is in some cases greater than one.

The strongest influence on the result, however, is the age at deportation. This is due to the short life expectancy in the camps. This is something I see frequently. Since every year lost counts like a year lived with a disability weight of 1, it often happens that the YLL greatly outweigh YLD in a DALY calculation.4

Of course, the strong correlation also means that more information on the age distribution at deportation would be valuable to improve the estimate. 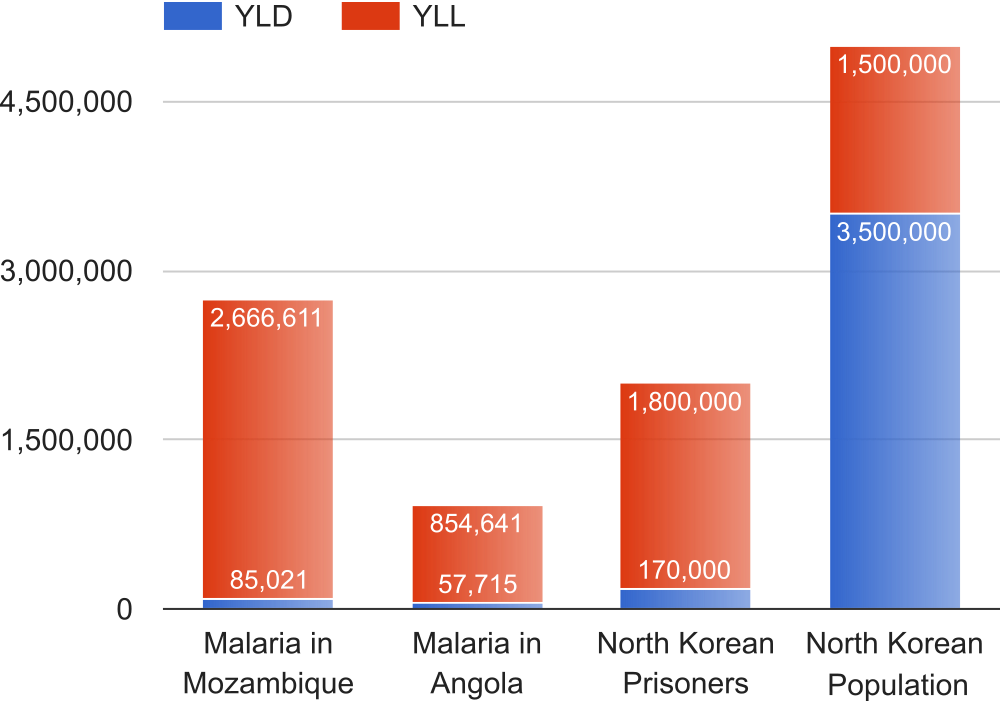 One key advantage of DALYs is their popularity, so I want to make use of that advantage and compare my results for North Korea to suffering incurred from malaria — something that many effective altruists are familiar with — in countries with very similar population where virtually the whole population is at risk of malaria: Mozambique and Angola.

A qualitative argument can be made, stating that so much suffering focused in such a small geographic and cultural space should enable us to find more effective leverage points for improving the situation than in the case of a global problem like malaria, but conversely it could also be argued that the enemy is a much more intelligent and rational one than in the case of malaria. The Anopheles mosquitoes are infamous for their rapid evolutionary adaptability, but a truly intelligent opponent may be far more formidable.

There are some interventions that I’m hopeful about, but in general I think the whole nonprofit space of human rights in North Korea is at a stage where foundational interventions like research and a better cooperation can yield the greatest benefit. If we want to prioritize the problem, it may thus be best to support umbrella organizations that foster cooperation — such as the International Coalition to Stop Crimes against Humanity in North Korea (ICNK) — with constant, reliable funding.