A quick post on a flyer I’ve come up with in cooperation with Charity Science (mostly Tom Ash) and that we then had implemented by a professional designer.

Animal Charity Evaluators has looked into leafleting as a potentially highly effective intervention and of its standout charities, Vegan Outreach, specializes in leafleting. So we figured we should try out how well the strategy carries over to effective altruism outreach.

The idea is to have a flyer for people who are already somewhat rational and altruistic and just have to learn about effective altruism. It is hard to convince people of rationality or altruism when they’ve lived good chunks of their lives remaining unconvinced of the value of them, and trying to achieve it on the four pages of our flyer didn’t seem feasible at all.

The flyer has a call to action that asks people to open a website. We can track visits of that page as well as donations through that page.

The Life You Can Save recently completed a similar trial run and ended up with a conversion rate of 0.6–1.1% of pamphletees visiting their website. At our cost of €0.055 per flyer (bulk rate for 1,000 pieces including VAT and excluding design), their conversion rates would lead to a cost per visitor of €5–9. (Too high in my opinion.) But we’ll also be tracking donations encouraged by the flyers. At the level of our current average donation of €36 (across a sample of 325 donations), we’ll need a conversion rate of 14–25% from visit to donation just to offset the costs. (Unlikely in my opinion.)

In total we got two conversions, people who visited the website, and no donations. The conversion rate is thus at 0.3%. Both visits happened shortly after the Vegan Summer Fair, where our audience was very different from that at the pony conventions, so within this cohort we have a conversion rate of 0.7%. That’s €8–18 per conversion.

It might be worthwhile to try this again at a university since the sample size is still small, since students are probably closer to the intended target audience of the flyer, and since I still have lots of flyers left.

Tom Ash (representing Charity Science) and I created a detailed concept document for the content but otherwise only specified the format (A5 folded once) and that we wanted the design to look somewhat sciencey. Sandaru on Fiverr then made a custom price for us and created the current design minus some small tweaks that I applied. The process was quick and smooth apart from some slight language barrier issues. 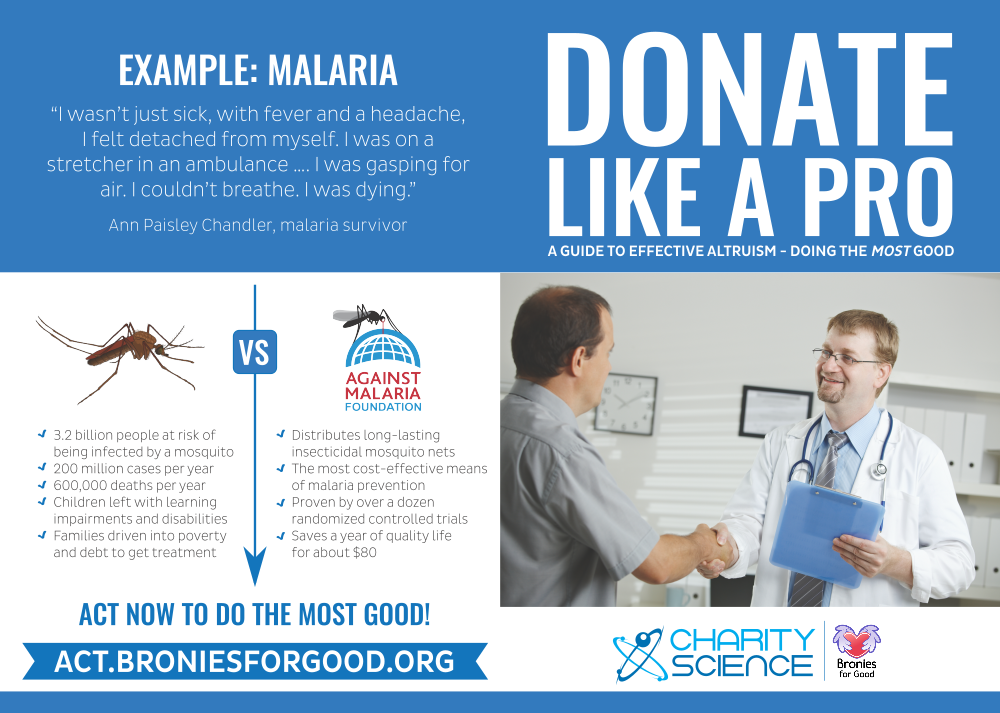 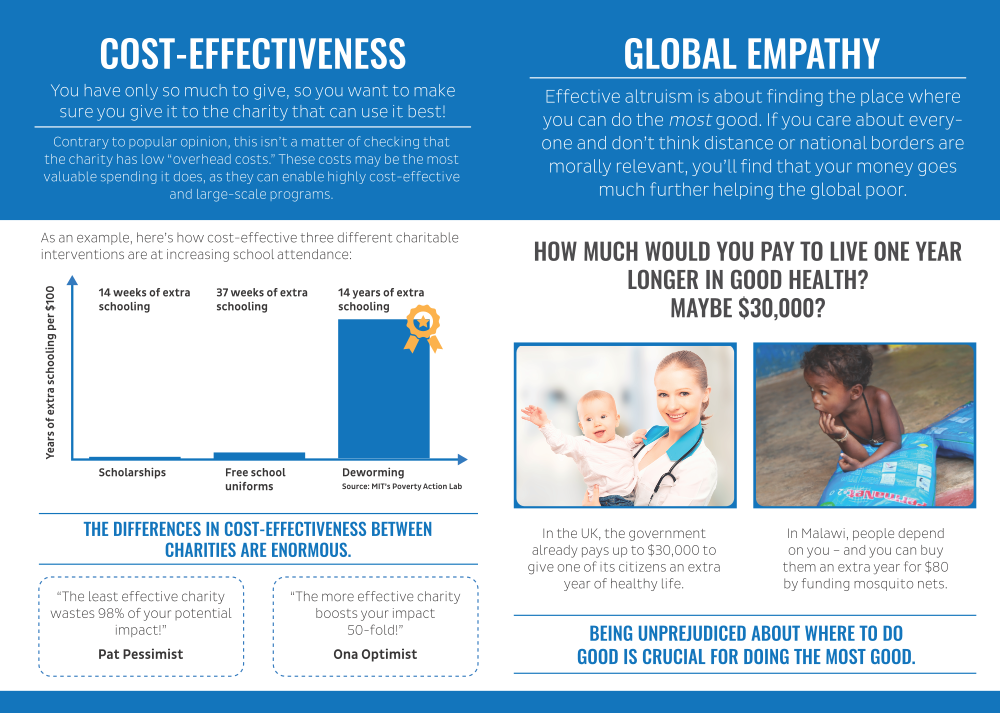 The first page is the outside of the flyer, pages 4 and 1, while the second is the inside, pages 2 and 3. The format includes 3 mm bleed on all sides. Please bear in mind that printers will usually want the files in CMYK, and that to get optimal results, you should convert it yourself and tweak the colors as necessary. I couldn’t get this to work in Inkscape and used Ghostscript to convert the exported PDF instead.

If you’re not discouraged by the small prospects of a worthwhile conversion rate, maybe because you need flyers for an event where you expect unusually high conversion rates, then you can download SVG versions of the flyer here:

You can replace the Bronies for Good branding with the branding your target demographic responds to. Please tell me your conversion rates.